[WARNING: Do not edit this page, or any pages related to it, without my permission. ~User:Phineasmon302]

Olympus Pretty Cure (オリンパスプリキュア Orinpasu Purikyua) is a fanseries by Cure Shabon, with a main theme of astronomy and astrology -- including, but not limited to, star signs, their respective ruling planets, and the gods said planets are named after, as well as many other aspects of Greek and Roman mythology.

Somewhere in space, the rulers of a realm known as Olympia, Lord Cepheus and Lady Cassiopeia, welcome the birth of their first child, Small Lady Andromeda, destined to rule the galaxy herself when she's old enough. Though their happiness is short-lived when a spirit of revenge by the name of Nemesis takes away, not just the baby, but also the twelve Horoscorbs that keep Olympia from falling apart, using her dark magic to turn the guardians of four of them into her minions. During the conflict, however, Cassiopeia managed to retrieve some of the Horoscorbs, sending these to Earth for safekeeping. Still, knowing that Nemesis and her servants would find a way to get the remaining Horoscorbs, their respective guardians head to Earth in order to find the legendary Pretty Cures, young Earth women with the ability to become powerful cosmic warriors.

A second-year student and member of Seibara Middle School's art club, Akira is intuitive, rational, serene and always willing to help, yet extremely sensitive as well. As Cure Neptune, she is powered by the Amethyst Horoscorb, and her element is water. Her name is a corruption of "shimizuakira" (紫水晶), meaning "amethyst".

A first-year student and member of Seibara Middle School's cheerleading squad, Miwa is athlethic, independent, cheerful and patient, yet incredibly careless, and naïve to the point of negative consequences. As Cure Venus, she is powered by the Chrysolite Horoscorb, and her element is air.

One of two Cures set to make her appearance mid-season. She is powered by the Topaz Horoscorb, and her element is fire.

One of two Cures set to make her appearance mid-season. She is powered by the Carnelian Horoscorb, and her element is earth.

Each episode is referred to as a "Mythos" (ミトス Mitosu), and all episode titles follow a pattern of "<Verb>, <term related to the episode>". 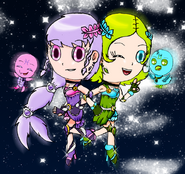 Add a photo to this gallery

Akira and Miwa in the opening theme.
Add a photo to this gallery

Retrieved from "https://oricureallstars.fandom.com/wiki/Olympus_Pretty_Cure?oldid=7992"
Community content is available under CC-BY-SA unless otherwise noted.